based in vegas, wandering the desert 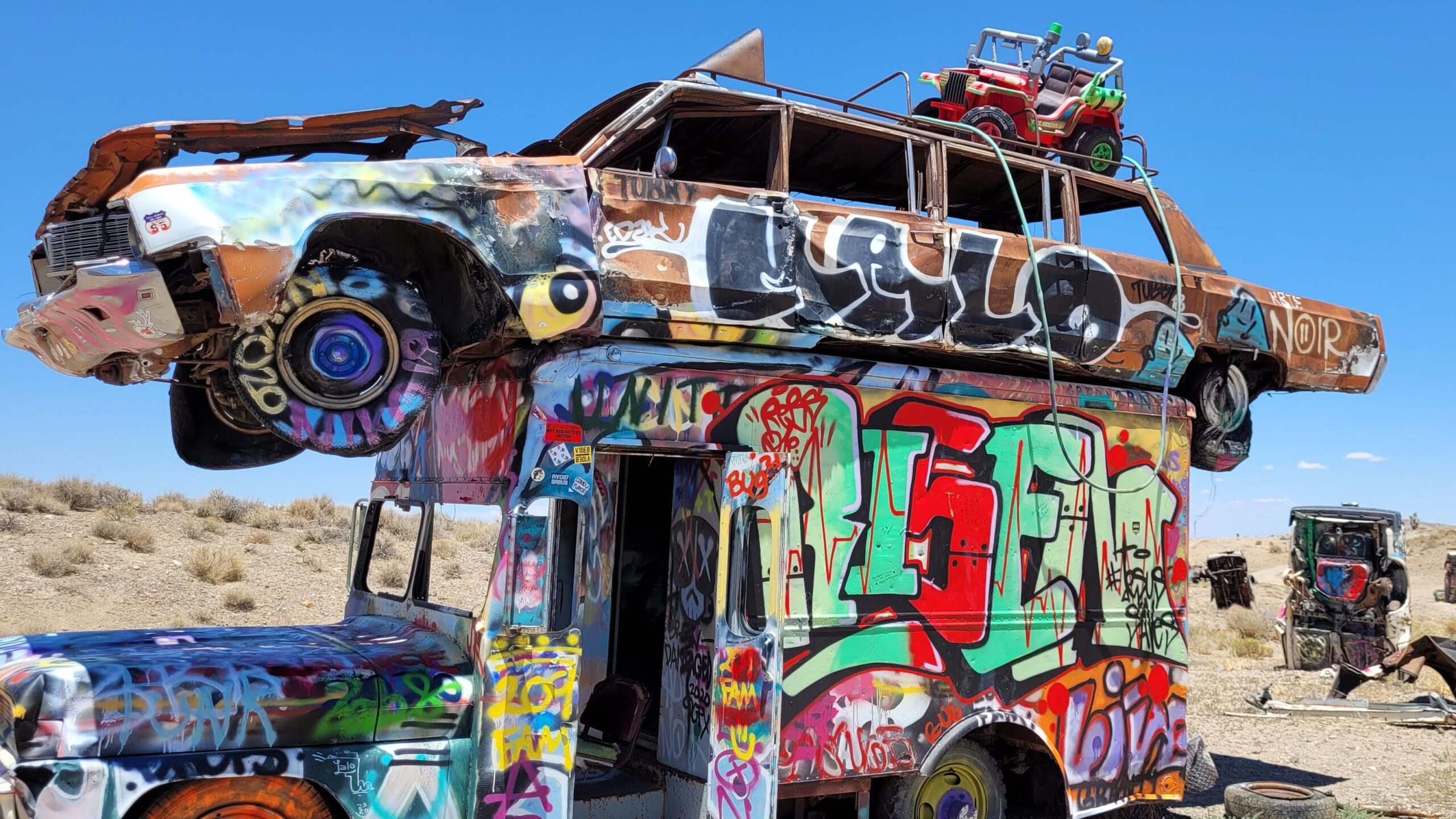 Nevada is weird, I’m frequently told by non-Nevadans (slot machines at the supermarket or quickie weddings, for instance). I tend to gravitate toward all things wacky and offbeat, so I’m prone to wearing weird Nevada idiosyncrasies as a badge of honor.

Maybe, I’m not the only one.

Earlier this year, Travel Nevada, the state’s tourism bureau, shared its inaugural list of the state’s Seven Weirdest Wonders, a play on the Seven Wonders of the Ancient World, but weirder (and in the Silver State). The list includes seven historic, man-made and natural spots in Nevada, covering the map as far north as Gerlach’s Fly Ranch Geyser and as far east as Garnet Hill in Ely.

Of the list above, I can personally vouch for Nos. 2, 3, 4 and 6. There are also a couple spots I’d add, but the list is, nonetheless, pretty legit. Here’s a look at the four weird attractions I’ve visited in person:

After missing this weird Nevada attraction on the drive to Northern Nevada (passing straight though Goldfield many times over the years), I finally visited it last summer. I wasn’t disappointed.

Somewhat dystopian and hauntingly beautiful, the non-profit International Car Forest of the Last Church in Goldfield, Nevada, has been compared to the Cadillac Ranch of Amarillo, Texas.

The Nevada version is larger and more eclectic. Junked vehicles stretch back toward and into the mountains. Some are buried headfirst or tail-first, others are stacked. Original, colorful graffiti art decorates each vehicle.

The “World’s Largest National Junk Car Forest,” it’s the brainchild of longtime Goldfield resident Mark Rippie with help from artists Chad Sorg and Zak Sargent (according to Travel Nevada). Over the past 10 years or so, these men grew the collection from one car taking a nosedive in the dirt to more than 40 vehicles of all shapes and forms.

A sign, wooden shack and porta-potty mark the entrance, which is easily accessible via dirt roads off U.S. 95 at the south end of Goldfield, about 190 miles northeast of Las Vegas

The International Car Forest of the Last Church is free to explore by car or by foot. The artists simply ask that you respect the art. In other words, don’t be a jerk.

Rocket Bob’s Art Cars: Also on the theme of crazy cars covered in paint is Rocket Bob’s Art Cars, located along Goldfield’s main drag. These mechanical and whimsical creations are well worth a stop too. The installations on wheels go way back, long before the car forest, and have even been seen at the Burning Man festival in the Black Rock Desert.

Equal parts creepy, cute and comfortable, you may have seen The Clown Motel in movies and on TV, most notably the Travel Channel’s Ghost Adventures with Zak Bagan. It opened in 1985 with a collection of 150 clown figurines. Today there are 3,000-plus.

As of 2019, Vijay Mehar, formerly a master chef at 5-Star hotels in Australia and Canada, owns the budget and pet-friendly motel. He came to Tonopah from Las Vegas to start “building his dream … with the zeal of an obsession,” according to the motel’s website.

When my husband, dogs and I stayed at The Clown Motel in 2021, Mehar was busy making improvements to the infamous property. He was adding grills on the patio and erecting a gazebo by the neighboring Old Tonopah Cemetery.

I look forward to returning soon to see what else is new.

Clownvis Suite: We stayed in Room 222, the Clownvis Suite, primarily because the King of Clowns feels very Vegas, and therefore less likely to haunt us than other clowns. I’m not sure my logic makes sense. That said, neither I nor my dogs felt nervous or uncomfortable in the brightly colored room.

Since theme suites are no longer open to pets (according to the motel website), I’ll have to leave my dogs at home or clown around in a different room next time.

The Goldwell Open Air Museum is home to eclectic open air art in the middle of the Mojave desert. It’s located in Nevada, off State Route 374, four miles beyond Beatty, and 5 miles to Death Valley National Park in California.

A truly must-see attraction, there are seven life-size sculptures on 7.8 acres, like a ghostly interpretation of the Last Supper by Leonardo Da Vinci and a 25-foot-high naked pink woman made of cinder blocks (she sort of looks like pixel art). The art originally came from Belgian artists, but there are also newer pieces by contemporary American artists.

Rhyolite Ghost Town: Just up the road from the weird Nevada museum, the Rhyolite Ghost Town (1904-1916) is also worth exploring. The town once had hotels, a school, a hospital and even a red light district. Remaining sites include a 3-story bank building, train depot and The Bottle House, built in 1906 by miner Tom T. Kelly out of 50,000 beer and liquor bottles.

Views of the surrounding valley are absolutely gorgeous.

No list of weird Nevada attractions would be complete without a mention of U.S. State Route 375, a.k.a. the Extraterrestrial Highway, near the infamous Area 51. The Alien Research Center is located at the eastern end in Hiko, Nevada, and it’s impossible to miss. An enormous silver alien statue stands out front as a beacon to those on the road or in space.

Independent digital publisher Stacker reports that around 4 million Americans believe they’ve been abducted by aliens (per a 1991 Roper Poll); the National UFO Reporting Center (NUFORC) has documented around 90,000 UFO sightings since 1974 (nearly 95% of those are called terrestrial activity).

The Alien Research Center is a gift shop with books about such matters, from alien abductions to sightings. During Alienstock (read this), the center went all out with bands and booths (I bought a bag of
“alien poop”).

The store hosts some alien-themed events throughout the year, so check out the website for more information. Owner, George Harris, is a believer with plenty of insight on aliens, UFOs and Area 51. He also owns the liquor brand, Alien Tequila Spirits.

After a few shots of his tequila, you might be seeing little green men, too.

Come along for the ride

Thank you for subscribing!

All photos, graphics & words on this site, © Aleza Freeman, unless otherwise noted.